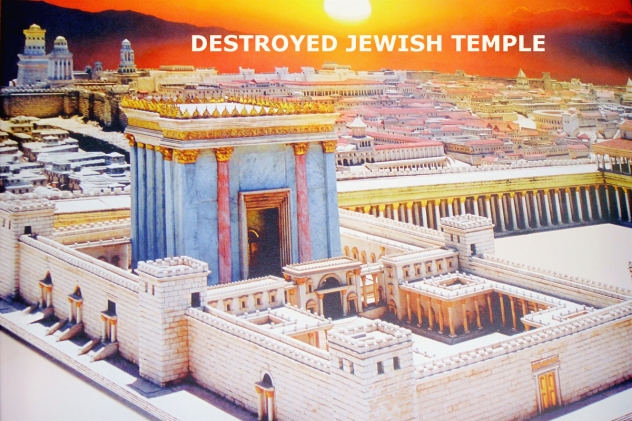 Titus 1:14 Not giving heed to Jewish fables, and commandments of men, that turn from the truth.
.
Jesus never said to learn Hebrew, or help the Jews get back to Israel when he instead predicted their dispersal next too because he knew they were falsely going to reject him as their Messiah.
.
Messianic Judaism is not just Christianity for Jews or even Christianity in a Jewish context. It is the modern equivalent of the “Judaizers” who plagued the New Testament in the time of the apostles. Today, as then, they attempt to bring both Gentile “proselytes” and Jews into bondage to law. Messianic Judaizers want to  Messianic Judaizers want to  impose not just mandatory circumcision on their followers but the entirety of the Old Testament law! “Set your minds on things above, not on earthly things.”  Jesus taught that Jewish nationalism and commitment to the “oral law” (“traditions of men”) distorted the purpose of the written law (Torah) (Mark 7:1-20) Even the Messianic Jews are falsely as antagonistic to Christianity as traditional Jews are. It is hypocritical for   Zionists to threaten the wrath of God against those who express disagreement with  them, the law when they have  themselves violated  God’s standards for the Jews. AND WHEN YOU DO NOT DO WHAT THEY WANT YOU TO DO THESE SAME RATHER LITTLE BAD CHILDREN INSULT YOU, SLANDER YOU, DIVORCE YOU, OSTRACIZE YOU, BAD MOUTH YOU. COUNT ON IT TOO THAT IF YOU  DISAGREE WITH  THE JEWS, ISRAEL AND SOME OF THEM FALSELY WILL SLANDER YOU IMMEDIATELY AND CALL YOU A LIAR, TERRORISTS OR ANTI SEMITE.
.
Jewish hostility toward Jesus Christ and His church has been ongoing for the last 2000 years still. The main problem still is that the Jews hate the  New Testament and the New People of God , the Christians, Apostle Paul too..  even Jesus in reality..  Jews today still have the mindset of Jesus’ enemies in the first century. Forget the Messianic Jews spin doctors,  Messianic Jews  still tend to be liars who tend to hate Christians, the Church.
.
The problem with Messianic Jews is..(1 Tim 1:7 KJV) Desiring to be teachers of the law; understanding neither what they say, nor whereof they affirm. (Heb 5:12 KJV) For when for the time ye ought to be teachers, ye have need that one teach you again which be the first principles of the oracles of God; and are become such as have need of milk, and not of strong meat. Rom 10:1 KJV) Brethren, my heart’s desire and prayer to God for Israel is, that they might be saved. 2 For I bear them record that they have a zeal of God, but not according to knowledge. 3 For they being ignorant of God’s righteousness, and going about to establish their own righteousness, have not submitted themselves unto the righteousness of God.

Most Messianic Jews will still go to hell if they have not abandoned their false practice of Judaism..

Christians and the current non-Christian Jews also do worship different gods , The Jews do not, did not truly honor Christ as the promised Messiah , but are looking for another that will come in his own name . The Talmud itself speaks of absolute mockery and hatred for Christ and Christians.

CHRIST – the anointed one- Greek for Messiah (anointed one) is Christos, Christ in English. Thus, “Jesus Christ” joins a name and a title, and means Jesus the Messiah. Christ, Messiah, Anointed One. The title “Christ” or “Anointed One” Gk. Christos “Cristov” occurs about 350 times in the New Testament.. The word christos means a person HOLY SPIRIT anointed . The Greek name for an individual “Christos” rendered “Christ” in Scripture, the basic of the term Christian now as well, comes from the Greek word “chrio” means to anoint with oil, the symbol of the Holy Spirit, one can tell if any person is a Christian cause they also can see the evidence of the holy spirit’s anointing.. so now we all can be anointed one inspectors of all Christians now too. Luke 4:18-19 (Wey) [Jesus:] “The Spirit of the Lord is upon me, because He has anointed me to proclaim Good News to the poor; He has sent me to announce release to the prisoners of war and recovery of sight to the blind: to send away free those whom tyranny has crushed, to proclaim the year of acceptance with the Lord.”But you have an anointing from the Holy One, and all of you know the truth. . . . As for you, the anointing you received from him remains in you, and you do not need anyone to teach you. But as his anointing teaches you about all things and as that anointing is real, not counterfeit–just as it has taught you, remain in him. 1 John 2:20, 27; The word christos means a person so anointed and the word chrisma refers to that by which a person is anointed. John uses chrisma in these two verses, not speaking of the object being anointed but of the instrument of anointing. Additionally, we find a word christianos in Acts 11:26, which means “one belonging to the Anointed One,” just as Herodianos would mean “one who belongs to Herod.” As the ultimate Prophet, King and Priest, Jesus Christ was anointed when he began his earthly ministry. This anointing was predicted by Isaiah in Isaiah 61:1 when he said that the Spirit of the Lord would come upon the Messiah. In God’s time, when Jesus was baptized by John the Baptist, we are told the Holy Spirit came upon him when he came up out of the water. In other words, he was anointed by the Holy Spirit, and that without measure. When Jesus quoted Isaiah 61:1,2 in the synagogue of Nazareth, saying, “The Spirit of the Lord is on me,” he was announcing to the people that he was the Messiah prophesied by Isaiah long ago and that the anointing of the Holy Spirit was now resting upon him. Not only is Jesus Christ anointed, but the Bible tells us that every believer in Jesus Christ is also anointed. We are kings, priests, and prophets under the Priest, Prophet and King, the Lord Jesus Christ. We find references to this in many places. John the Baptist said there was another person coming after him, mightier than himself, who would baptize people in the Holy Spirit and fire. In Acts 1:5 the Lord Jesus Christ himself speaks of this, saying, “For John baptized with water, but in a few days you will be baptized with the Holy Spirit.” This was fulfilled on the day of Pentecost, as we read in Acts 2:4: “All of them were filled with the Holy Spirit and began to speak in other tongues as the Spirit enabled them.” The Greek word for anointing is chrisma, from which we have the word chrism. Chrisma appears several times in 1 John 2:20 and 27. It comes from the root word, chriô, which means to rub something or someone lightly with a substance like oil or lotion. Thus, when John writes in 1 John 2:20, “But you have a chrisma, an anointing,” he was referring to the coming of the Holy Spirit upon every believer.;

Now “the Israel of God”  includes all who belong to Christ, Jews and non-Jews alike.  Being a part of the Israel of God is the privilege of all who abide in Christ, because Jesus is true Israel, God’s chosen One.

“Do not lie to one another, since you have put off the old man with his deeds, and have put on the new man who is renewed in knowledge according to the image of Him who created him, where there is neither Greek nor Jew, circumcised nor uncircumcised, barbarian, Scythian, slave nor free, but Christ is all and in all” (Colossians 3:9-11).